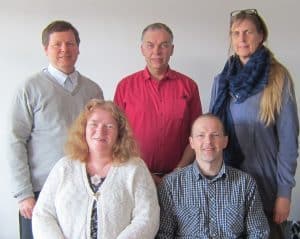 At the Church of Norway General Synod in 2007 and 2008 Ingjerd and Jo Hedberg where there for prayer and intersession.  In 2007 we were requested by the «Yes to marriage movement» and  «Prayer for Oslo» covered some of the costs in connection with prayer and intersession in 2007.  We sent out prayer messages on e-mail to our own networks and to Gunnar Brudeli `s prayer network.  In 2007, we received feedback that the mood in the General Synod was better than the past years, despite the difficult issues that were up there then.  We got Norwegian TV2 on the door where journalists mentioned this and came to us because they thought it had to with prayer. They made a interview about this and showed it as the main case in the news that day.

It was possible and we had a good week on the General Synod.  We were 5 to 7 people every day in the chapel. The others were mostly local Christians.

We feel that God calls us to continue and expand the prayer service and for and in the Norwegian church.  We have until then used prayer networks in the Free Churches in Norway. But now we feel that it is important to establish a prayer service inside the Church of Norway, around the church election, the General Synod, National Council, Bishops’ Conference, also, Church of Norway Council on Ecumenical and International Relations and the Sami Council.

Prayer for the Church of Norway is a registered as a origination in Volunteer Register and our board consists of:

It is possible to give a gift to the prayerwork at:

Thank you! Your gift will bring more of the glory of God to Norway!